Owner ties dog to gate & drives away, and pup waits for someone to rescue her It’s hard to comprehend how little sympathy humans have for animals. Especially after they possess one. Alas, heartbreaking tales of abused and abandoned dogs persist, and an RSPCA shelter in Leicester, England made headlines in March for yet another example. 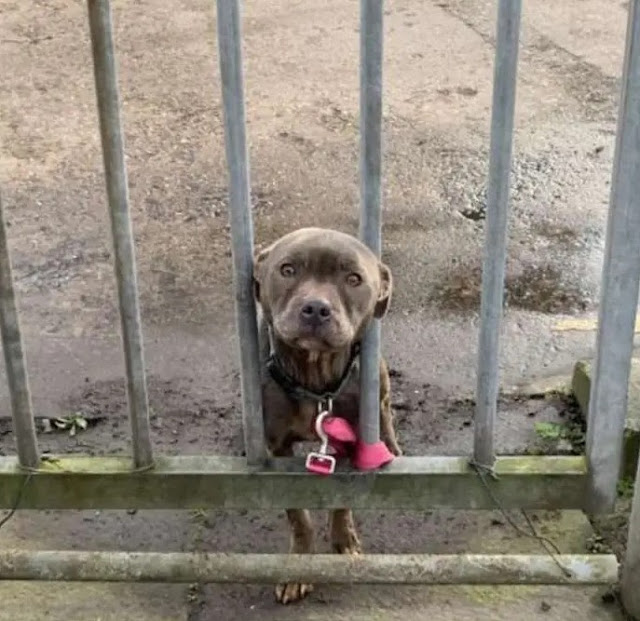 Workers at the Woodside Animal Shelter were astonished when the got into work on a Wednesday in March to discover her tied to their front gate. It was unknown who left her there or how long she had been there without food or drink (though it couldn’t have been more than an evening).

The cute little dog was only waiting for someone to locate her and became so pleased when she met her rescuers.

“She was standing with her head thrust between the bars of the fence, her ears back with these large, brown puppy dog eyes,” a spokesperson from shelter stated in a news statement. 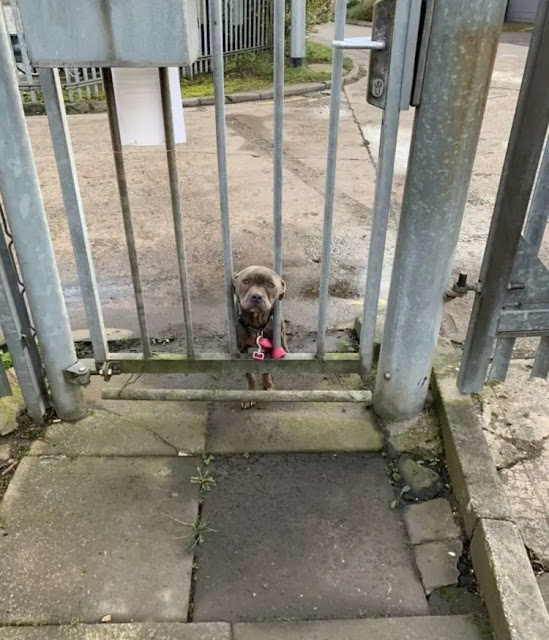 Misty certainly had a difficult past before making her way to the rescue.

For starters, she appeared underweight and images reveal her ribs exposed beneath her skin. There were also wounds on her nose and a skin ailment to address. 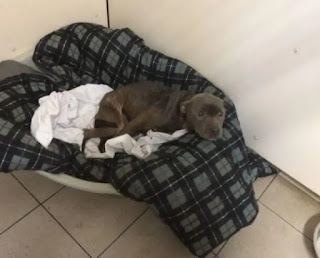 Her rescuers located a microchip in Misty, but when they phoned the number she was registered to, they were told she had been rehomed years before. There was no additional information as to why that was or who her future owners were (nor how she got to be abandoned) (nor how she came to be abandoned).

Since England has a detailed Animal Welfare Act (revised in 2006), her abandonment is considered a felony. An inquiry was initiated and looks to be continuing.

Woodside Animal Center shared the information on Facebook and requested anybody with knowledge about her “owners” to get in touch. Their post read, in part:

“You may have noticed in the news today a story about a tiny Staffy who was left chained to our gates at Woodside.

This complaint is being handled with immediately by RSPCA HQ since this is now a criminal case. The Staffy is being cared for at Woodside and is getting specialist care to ensure she is well both physically and mentally.”

In March, her rescuers issued a small update about the adorable Staffordshire Bull Terrier in answer to an inquiry from a concerned citizen:

“Misty is doing fantastic and is healing well under our care. Once she is eligible for rehoming we will be able to offer a comprehensive update.” In June, she became up for adoption once the lockdown ended in England and promptly found her forever home with a couple that’s looking forward to giving her a great life.

The shelter announced the wonderful news along with a picture of Misty and her new parents:

After being left tethered to our gates earlier this year, Misty became part of an RSPCA cruelty investigation. After winning her case during lockdown, Misty could finally begin the hunt for her permanent home.

Misty had tons of interest and we are thrilled that so many of you decided to open your homes and hearts to our precious girl.”

Misty’s new mom Jane Wingfield even shared a picture and update on the dog for worried animal-lovers who wanted to make sure she was settling well.

“She’s really adorable and has settled down well. So happy to have been asked to be her parents,” Wingfield said in the comments on Misty’s adoption post.